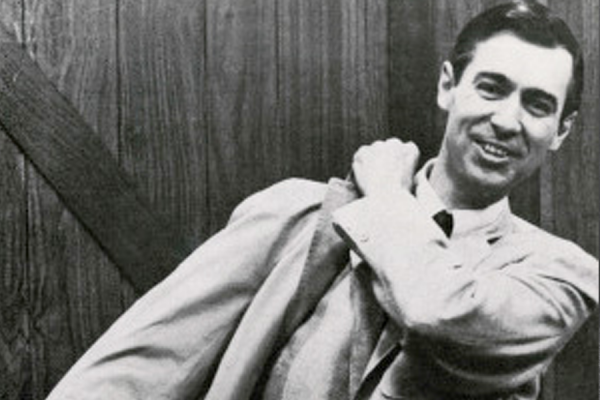 Mister Rogers- speaking to children with acceptance, kindness, and empathy.

Probably no human has made a bigger mark on children’s television than Fred Rogers (1928-2003), who is more commonly known by the title of his show, Mister Rogers. The show, Mister Rogers Neighborhood, ran from 1968 to 2001 on public television and was a staple for young baby boomers and generation X viewers.

I grew up in the time of Mr. Rogers, and children’s television back then was dominated by cartoons. There were funny, violent cartoons like Looney Tunes and Tom and Jerry, and there were serious, violent cartoons with superheroes like Batman, Superman, and more. But mostly what I remember is goofy humor and cartoon violence where no one actually gets hurt. Into that void came two revolutionary shows on public television- Sesame Street and Mister Rogers Neighborhood. Both shows catered to children but tried to educate and inform. Sesame Street used puppets to educate, and Mister Rogers used puppets to help children negotiate their feelings.

Mister Rogers Neighborhood was remarkable because of how simple it was. Fred Rogers, a soft-spoken Presbyterian minister, wrote and starred in this gentle talk show that had no special effects or animation- just a few puppets. That this show later became a nationwide phenomenon is a testament to the power of Mister Rogers message and personality. Even 20 years after his death, his ideas and beliefs are still inspiring people both young and old.

Fred Roger’s gift was his ability to talk softly and honestly to his youthful audience, calming their fears and making them feel loved like no other show before or since has accomplished. His show was a 30 minute exercise in mindfulness, where the host gave 100% of his attention to his audience and the occasional guest. He spoke warmly, calmly and deliberately about the beliefs nearest and dearest to him- friendship, understanding, and empathy. For a child with arguing brothers, sisters, and parents in a turbulent world, Mister Rogers Neighborhood was a safe space.

“I like you just the way you are”, Rogers would say in episodes, which ran counter to the messages that children were getting from parents and television advertising. Accepting yourself, warts and all, is one of the hardest and most basic steps to mental fitness. Mister Rogers made sure to extend his friendship to young viewers in every episode. He used songs, puppet shows, and stories from his own life to illustrate how important friendship can be in life, and that love spilled out to Rogers every time he set foot on the public stage.

The period in which the show ran was a turbulent one for children, and Mr. Rogers was one of the best in helping his viewers and their parents deal with it. He devoted several shows to the topic of divorce to reassure children that parents splitting up has nothing to do with anything they did. He famously shared a foot bath with a black postman in a show of racial acceptance and solidarity. And in a touching episode he showed the death of one of his tropical fish and used it to go into a meaningful discussion of death and what it means, using his own dog’s death as an example.

Mister Rogers gave us permission to feel our feelings and was in many way’s the first therapist that most of us had. Children’s television programming at the time completely ignored this basic need, and that’s why Mister Roger’s simple, loving, and brave discussions of topics that bring up feelings was so important.

Although Fred Rogers passed away in 2003, his words live on through places like the Fred Rogers Center in Pennsylvania where early childhood professionals can get help with programs that strengthen relationships between children and adults. The center’s website proclaims- “The foundation of every child’s healthy development is the power of human connection. Whether we are parents, educators, media creators, or neighbors, each of us has unique and enormous potential to nourish children’s lives with positive interactions.”

Mister Rogers and his show had a huge impact on adults as well as children. Rogers famously testified before congress in 1969 defending public television against proposed cuts, and ended up convincing a committee to raise the funding instead. And then there’s this:

Starting with 9/11 and after every national tragedy since, his wise words to always look for the helpers gave comfort to a nation grieving and hating itself and others. The helpers are always there, and we ignore them at our peril.

Children today face an even bigger onslaught of advertising and videos that can produce feelings of inadequacy, anxiety, and fear. Today’s children are more glued to their screens than any generation that preceded them. Mister Rogers cautions us that loving, caring relationships with parents and other adults are what children need the most. His words live on at PBS, on his website, (misterrogers.org), in books and movies, and in the hearts of the grown-up children who now run the world. We need many more kind, thoughtful men and women interacting with our youth today. Now more than ever.

“All of us, at some time or other, need help. Whether we’re giving or receiving help, each one of us has something valuable to bring to this world. That’s one of the things that connects us as neighbors–in our own way, each one of us is a giver and a receiver.”

“When I say it’s you I like, I’m talking about that part of you that knows that life is far more than anything you can ever see or hear or touch. That deep part of you that allows you to stand for those things without which humankind cannot survive. Love that conquers hate, peace that rises triumphant over war, and justice that proves more powerful than greed.”

“As human beings, our job in life is to help people realize how rare and valuable each one of us really is, that each of us has something that no one else has- or ever will have- something inside that is unique to all time. It’s our job to encourage each other to discover that uniqueness and to provide ways of developing its expression.”

“How many times have you noticed that it’s the little quiet moments in the midst of life that seem to give the rest extra-special meaning?”

“In times of stress, the best thing we can do for each other is to listen with our ears and our hearts and to be assured that our questions are just as important as our answers.”

“Little by little we human beings are confronted with situations that give us more and more clues that we are not perfect. “

“Love is like infinity: You can’t have more or less infinity, and you can’t compare two things to see if they’re ‘equally infinite.’ Infinity just is, and that’s the way I think love is, too.”

“Everyone longs to be loved. And the greatest thing we can do is to let people know that they are loved and capable of loving.”

“There are three ways to ultimate success:

The first way is to be kind.

The second way is to be kind.

The third way is to be kind.”

“I’d like to give you all an invisible gift. A gift of a silent minute to think about those who have helped you become who you are today. Some of them may be here right now. Some may be far away. Some, like my astronomy professor, may even be in Heaven. But wherever they are, if they’ve loved you, and encouraged you, and wanted what was best in life for you, they’re right inside your self. And I feel that you deserve quiet time, on this special occasion, to devote some thought to them. So, let’s just take a minute, in honor of those that have cared about us all along the way. One silent minute.

(Come on reader- try it)

Whomever you’ve been thinking about, imagine how grateful they must be, that during your silent times, you remember how important they are to you. It’s not the honors and the prizes, and the fancy outsides of life which ultimately nourish our souls. It’s the knowing that we can be trusted. That we never have to fear the truth. That the bedrock of our lives, from which we make our choices, is very good stuff.”