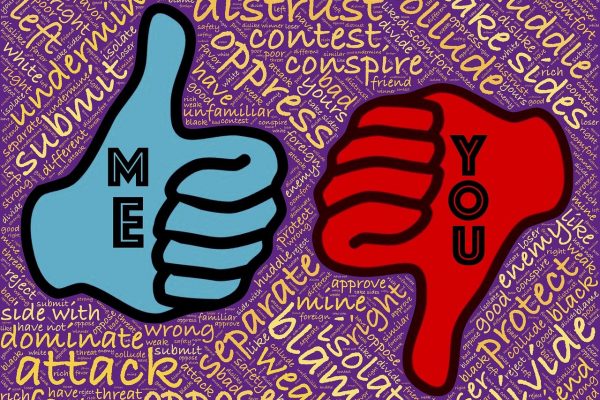 German soldiers near the end of World War II were among the most determined warriors ever- battling to the last man even though they knew they were losing the war. When interviewed after the war was over, the soldiers professed no great love for Hitler or what he stood for. Their main loyalty was to each other, and they fought to the end rather than betray their fellow soldiers. They could have surrendered, but many chose to fight on in a war they little understood for leaders who were long gone.

This kind of fanaticism makes me wonder about our politics today. How can we be so extreme, certain, and dogmatic about complicated political issues? Why are elections so expensive, long, and devoid of actual content or discourse? Politics can make seemingly rational people believe in conspiracy theories, turn against their own families, and withdraw into a bubble of self-fulfilling prophecies. People are more tribal when it comes to politics than I’ve ever seen in my lifetime. It’s not enough that we want our teams to win, we have to demonize the other side as evil or sub-human. Compromise is unthinkable.

Elections and democracy can be healthy endeavors. They give each voter a sense of agency- a feeling that their opinions and efforts matter. That’s huge- because the alternative view is that they are mere pawns. It also gives government a chance to take a breather and honestly debate the issues and alternatives that face them at any particular time. Asking the right questions is essential to coming up with better answers, and that’s what elections should be encouraging. Most importantly, it re-connects leaders with their constituents, forcing them to listen while adding accountability to positions that can go off the rails with too much power.

Assuming a tribal identity means that you lose some of your personal identity. For some, it’s worth the trade-off. Your tribal identity defines what media you consume, where you live, who you make friends with, and many details of your life. It makes life simpler by cutting down the number of options on how to behave. By joining a tribe you get immediate benefits- a new group of friends to hang out with and a sense of meaning to your life. Plus you get one added benefit- someone to hate and look down on, the people not in your tribe, the “others”, upon whom you can blame many of your problems.

But tribes can be destructive and detrimental to our long-term survival. Just look at the United States of America. We are tearing each other down and nothing is getting done. Infrastructure? Our roads, bridges and basic systems are falling apart. Health Care? Twelve years of fighting about it and we may end up right back where we started or worse next year. The deficit? Bigger than ever and no one has a clue what to do about it. Foreign policy? The world now takes pity on us while the Chinese are extending their economic powers in places we can’t touch. That, plus now we can’t even figure out the nature of reality, and are having stupid arguments about what the actual facts of our situation are.

Negative tribalism is what’s driving the 2020 election, and that can’t be good for America in the long run. For the first time ever, there are legitimate fears that nationwide violence could break out if one side believes they’ve been cheated, whether they have proof or not. On the one side, Republicans are claiming that their opponents want to destroy the country with crime, drugs, and socialism, while on the other side the Democrats claim that their opponents want to poison the country, give all the money to the rich, and rip away healthcare from every sick person. The kind of hate-filled vitriol does no good for anyone, yet it fills up the internet, television advertising, and email inboxes every single day during election season.

Why have we resorted to tribalism to the point that we’re willing to disown our family, friends and neighbors? I can answer that in one word- Anxiety. Worries and fears about the future are more rampant worldwide than ever before. Anxiety is the number one mental illness, and stress is the number one cause of many of our mental and physical ailments. But what are we so anxious about?

People are worried about keeping their jobs in the age of artificial intelligence and the gig economy. They’re worried about racial strife and whether other races want to hurt them. They’re afraid for their children in an age of less opportunity, more inequality, and skyrocketing tuition rates. They’re scared of getting sick and dying. They’re anxious about big things they barely understand like climate change, pandemics, terrorism, the economy, and drug abuse, any one of which could devastate their lives. And of course they worry about love, money and all the things that they normally would worry about. There’s an enormous weight of anxiety out there, and then there’s an unscrupulous group of people waiting to capitalize on it.

Joining a tribe insulates us from all that anxiety, but it doesn’t seem to be solving anything. All the problems are still there, and they seem to be getting worse, not better. Our embrace of tribal politics cuts off all constructive discussion, shuts down important questions, and makes compromise almost impossible. Politicians are afraid to offend their base and have been adamant in adhering to tribal loyalty.

So what’s the best antidote to anxiety? For starters, we need to manage our stress levels and take care of ourselves. Eat and sleep well, relax and have fun and socialize with others. Certainly there are drugs we can take to try to muzzle anxiety, and Americans take plenty of drugs-prescription, recreational, and illegal. But they don’t seem to be helping much.

For the big, existential anxieties, the best antidote is talking about concerns, fears, and worries, then actually facing them. It’s asking the tough questions like “what’s the worst that could happen and what would I do then?” It’s realizing that most of the things we worry about aren’t near as bad as we imagine. And it’s relying on others, not just those in our tribes, to provide feedback and support so that we can overcome whatever challenges life throws our way.

In a way, anxiety is a learning disability. Our brains can construct elaborate models about the world, and if fear becomes the guiding force, it can build elaborate walls to shut the world out, except for the tiny bits of information that confirm what we already believe. But no matter how smart we are, those models are always incomplete, and by shutting out the world we fail to learn how to make them better. There is a huge mismatch between our model and the world, and we cling to the models because they’re the only things that have made sense so far. But deep down we know better. We know that our models are faulty and get anxious about all the things that don’t fit neatly into them. That’s why talking, learning, discovering, and facing our fears is always the best way to deal with anxiety at its core.

I am hoping and praying that this election makes things better but have no illusions that our problems will be behind us in 2021. I’ve been through too many election cycles and have seen the tribal partisan gridlock rear its head too many times. Of course we all should vote, if only to empower ourselves and improve the levels of our representatives. But for goodness sake, don’t drive yourself crazy over politics and politicians. Stay above the nastiness, lies, and hatred. Turn off the cable news and the conspiracy websites. Look to see the world for the complex, amazing, and confusing gift that it is.

And come 2021, we will need to continue talking, learning, questioning, protesting, and looking for better ways to make our models meet the realities of the world. Anxiety be damned.