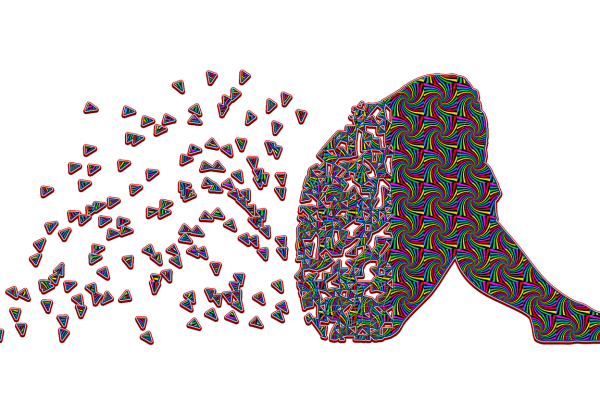 In any mental health journey, the discussion turns to stories. Everybody has a story, especially of when they realized they had mental illness and how they reacted.

My childhood was fairly event-less, with no big traumas or tragedies. My parents lived in a nice neighborhood, sent me to private schools, and never divorced. My parents were relatively healthy, had an active social life, and raised me as well as they could.

My first ten years I recall as being fairly happy and normal, but once puberty hit things went rapidly downhill. I had a thyroid disease that shut things down in my teen years causing me to gain weight and lose self-esteem. I entered into a decade-long depression that drove my parents crazy and shot down all of my enthusiasm for life. Even though I got good grades and acted quietly “normal”, I was miserable inside and became more and more depressed and lonely.

Academically, I did well in high school and college, but socially and athletically I shriveled into a protective ball. For college I went 1000 miles away from home, and was lucky to find a few good friends I still have to this day. But by the time I graduated college, I ended up with a lot of book learning, but was totally unprepared for the world of work, dating, money, and responsibility. The years after college were a disastrous spiral of attempts to figure myself out and failures to find jobs, friends, or meaning. I can still see my mother’s exasperated face as she tried to pep me up and encourage me, both of us totally unaware of the depression that had shut me down.

The turning point for me came during that dark time when I stumbled into a two-day self-esteem seminar in St. Louis run by Jack Canfield, who would later go on to helm the Chicken Soup for the Soul book series. This seminar opened my eyes up to another way of thinking, giving me hope that I could change and wasn’t actually a worm-like subhuman. Canfield would give talks, dialogue with participants about their troubles, and divide us into small groups, all with the idea of looking at what wasn’t working for us in the past and what we wanted for the future. I learned about meditation, affirmations, goals, dealing with your past, hugs, and positive thinking all in a two-day span. Coming from a family where no one talked about their problems in the open, it was cathartic for me to listen to others and realize that many of them faced the same struggles that I did. I was so impressed that I ended up joining Jack for six more seminars in coming years.

Suddenly aware that there were alternatives to being depressed, I became obsessed with psychology and self-help books, and signed myself up for my first therapist. I got on thyroid medicine which has made a big difference and started looking to make some big changes in my life. Within a decade I began dating for the first time in my life, got a full-time job that had meaning for me, got married, bought a house, and had a child.

But this is not quite a happily-ever-after story. Depression can always return, and it did several times for me when big, traumatic events came and knocked me down. I realized how fragile mental health can be and learned that it would be a lifelong journey to improve my emotional and mental fitness. I lost both of my parents, was fired or laid off from four jobs, and had to abandon the only career that had given me meaning. Each event made me re-evaluate my life and tossed me into the abyss of sadness and confusion, if only for a while.

With each disaster, I learned better how to climb my way back to a better place. I started on antidepressants, went back to school, changed careers, and rediscovered my passion for learning and writing. Starting with my last layoff in 2011, I began devouring non-fiction books, trying to learn more about how the world works and how to be better in it. Going back to school in middle age was tricky but enlightening. Reading inspiring books was transforming- better for me than therapy. I now saw a light and the tunnel was no more.

Depression is one of the top mental illness threats and one of the most deadly. It’s common for people with depression to have thoughts of suicide and a small percentage of them act on those thoughts. Depression comes in many forms, from minor cases to debilitating ones, from temporary disorders to ones that last many years. It often is triggered by traumatic episodes, or it can arise for no reason at all.

The Covid epidemic has increased the prevalence of depression worldwide, and we will be talking much more about this insidious disease later on. My experiences with the disease make me respect its dangers, and work hard to outwit its many lies. This blog is an attempt to shine a light on depression and other mental dysfunctions, pointing the way towards hope, health, and fitness where even big events like this one don’t have to be major roadblocks to happiness.